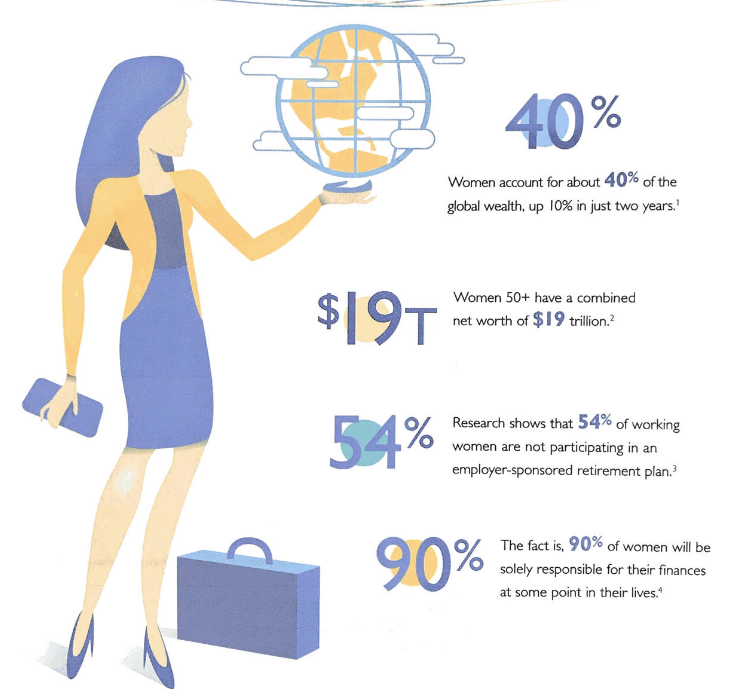 As today marks the beginning of Women’s History Month, it is important to recognize that women are more powerful now than ever. The fact that women are becoming even more influential to not only finance, but the world is something to be acknowledged. In the United States, 49% of women say they work because they are their family’s breadwinner, up from 37% in 2000. One explanation for this is that the rate of single motherhood is on the rise, having nearly doubled from 1974 to 2015, from 14.6% to 26.4%. On the other hand, the perception of women working has changed and is becoming more accepted. In 2000, less than half of all Americans viewed women working while raising children as a “positive development.” Now, 78% of Americans view working moms as a “positive development.”

Women and Financial Trends In a Global Wealth report conducted in October of 2018, it was reported that women account for about 40% of the global wealth, which is up 10% in just 2 years.

– there has been an increase of self-made women Women are having influence in the economy—women 50+ have a combined net worth of $19 trillion.
– baby-boomer women rule the market
– women are surpassing men in education – women are gaining traction in the workforce
– women control the purse strings
– women are handling the purchases in stereotypically “male” industries – women save more
– young women control brand perceptions online Research shows that 54% of working women are not participating in their retirement plans.
– women seem to have a larger share of non-financial assets like real estate or other real assets 90% of women will be solely responsible for their finances at some point in their lives.
– women tend to trade less often and focus on creating plans with a purpose, not just creating wealth for the sake it.

– Most women are putting caring for others above retirement savings!