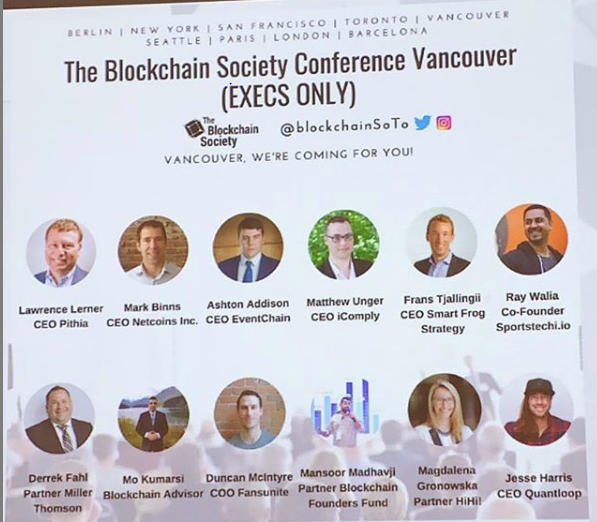 The Blockchain Society is hosting a special conference for investors, regulators, corporate and blockchain thought leaders on January 15, 2019 at Fasken Martineau DuMoulin LLP.

Here are some highlights from the show:

Mark Binns is the CEO of Netcoins, and has over 20 years of experience building customer-driven sales and marketing strategies. Mark has founded, built, and sold two consulting companies that provided strategic advice on customer acquisition and revenue growth to Fortune 1000 technology companies including RIM, Cisco and Rogers. Mark has also scaled two SAAS based software businesses in the B2C and B2B spaces into leaders in their respective markets. Mark is a Dean’s Honors graduate of the Ivey MBA program and Graduate of the Computer Science Honors program at Acadia University. Mark has led his companies to PROFIT HOT 50 and PROFIT HOT 100 awards, and was nominated by the Dean of the Richard Ivey School of Business for the prestigious business award of Canada’s “Top 40 Under 40”.

Lawrence Lerner is the CEO of Pithia, and a pioneer in Digital Payments with a history of success in innovation, both within large corporate and startup structures. During his career, Lawrence has worked across industries in multiple roles (executive, lead technologist, public board director) to enable digital transformation, scaling up businesses using edge technologies and processes creating $100Ms in new revenue. Whether it was re-architecting Dun&Bradstreet’s core product (35% growth), delivering the next generation of coupons across 31,000 retailers, growing an outsourcing business by $100M, defining Motorola’s smartphone/ecommerce strategy or helping launch a dozen startups he’s generated wealth for businesses, owners and shareholders. Lawrence has worked in the cryptocurrency space since the late 90’s. Today he is the CEO of Pithia, a blockchain venture company with four startups in the portfolio. They are currently raising their second blockchain fund.

Duncan McIntyre, COO of Fansunite, Duncan is a practicing blockchain and digital asset lawyer and investor. He has experience in mergers, acquisitions, other corporate transactions, and civil litigation. As the co-founder of FansUnite, he has extensive experience in product development, overseeing daily operations and business development.

Derrek Fahl is a member of Miller Thomson’s Blockchain, Cryptocurrency and Smart Contracts Team, and has extensive knowledge of the world of blockchain, cryptocurrencies, coins, tokens, smart contracts and raising capital using these emerging technologies, both through conventional securities offerings and Initial Coin Offerings (ICO’s). Derrek has worked for companies in regards to their offering of security tokens (private placements and ICOs), utility tokens (often under the SAFT protocol), stablecoins, token exchanges and other means of secondary market trades. Derrek‘s work for his clients includes planning or reviewing corporate and offering structures, drafting and reviewing whitepapers, offering documents and subscriptions, interactions with securities regulators and other capital market participants, and communications with external advisors, including tax and finance.

Ashton Addison, CEO of Eventchain, has been involved in the blockchain industry since 2013, through the initial rise of Bitcoin price and the lead up to the Ethereum ICO. As the CEO and Founder of EventChain, he pioneered the team through a successful tokensale in September of 2017. He also advises various other Blockchain companies globally including Syscoin and CoinPayments.net in Canada, Pundi X in Indonesia and SmartMesh in China. Together with EventChain and his associated blockchain projects he has helped raise over $50M cumulatively.

Matthew Unger is the CEO and co-founder of iComply Investor Services. At 22, he became one of the youngest executive financial advisors in Investors Group Financial Services’ history, building a $42-Million business in under 5 years. He has a decade of technology management consulting experience, driving innovation for companies ranging from high-growth startups seeking to scale into enterprise markets to major multinationals, including Virgin Group, Investors Group Financial Services, BDC, and Bank of Canada. Matthew has also provided consulting services to organizations, such as the Canadian Centre for Cold Climate Innovation and First Nations Technology Council, and has held Secret-Level clearance with CSIS (a.k.a. Canada’s CIA). His previous FinTech experience includes leading the systems architecture in 2015 on an end-to-end digital workflow solution for a wealth management firm in Canada. In 2016, Matthew led the technical management for CME Group’s first proof of concept to use Ethereum to automate the matching and fulfillment of interest rate swaps over LIBOR. Matthew completed MIT Media Lab’s Fintech Innovation Management program with distinction and also holds a management certificate from MIT Sloan in Artificial Intelligence and Business Strategy.

Magdalena has 10 years of experience accelerating Ontario to an innovation-based economy, providing strategic advice at the highest levels of provincial government. She has led complex $million and $billion public sector projects to accelerate business growth, innovation, and disruptive tech deployment. Magdalena has dedicated her career to designing solutions that leverage innovative technologies and private markets to maximize sustainability. She advocates for blockchain-based climate change and energy applications and is working with start-ups in the fintech and crypto space.

Frans Tjallingii is an experienced leader, entrepreneur, advisor and board member. Most recently he was the Co-founder and CEO of First Coin Capital which was acquired by Galaxy Digital, a full service merchant bank for the cryptocurrency and blockchain industries. At First Coin he worked on different emerging technologies in the FinTech and a variety of other industries. Prior to starting First Coin, he gained an extensive corporate strategy, turnaround and investment analysis experience. He has been a serial start-up enabler since 2014 and is passionate about making an impact in the world, through the startups that he assists and not for profits, such as New Leaf Project which aims to find innovative solutions to homelessness. Frans holds an MSc. in Marine Biology from the University of Groningen and an MBA from the Rotterdam School of Management.

Ray Walia is a serial entrepreneur with over 20 years of experience in both the entertainment and technology sectors. Ray founded Launch Academy, Vancouver’s leading entrepreneurship facility, which has hosted more than 600 startups that have raised over $150 Million in funding. In 2015 Ray co-founded Victory Square and in 2017 Launch.vc, two venture build studios with a focus on sports and entertainment technology companies. Ray was named Entrepreneur Mentor of the Year for 2014 and 2015, BIV Top Forty Under 40, G20 Young Entrepreneur, and BC Tech Person of The Year Finalist 2018.

Jesse Harris has had an amazing path of many different jobs and adventures from the early days in forestry to creating documentaries and filming the largest feature films and TV shows in the world. Jesse’s interest in technology started with the growth of digital cameras and media after getting hired to build a 3D printed interactive TV for DirectTV in Los Angeles. Entering into bitcoin in 2010, thanks to some out-of-the-box thinking friends, he starting a social sports betting platform in 2012 while trading emerging cryptocurrencies. These ventures immersed Jesse into the blockchain space, and gave him a real glimpse into how powerful global decentralized minds can be when combined. In 2017, Jesse was called by an old friend interested in blockchain technology and it sparked an inner fire to create something to help the world. “Quantaloop was an idea to combine the talents of the many amazing people I have met in my life.”