Nitrogen cycle & why we need to be concerned 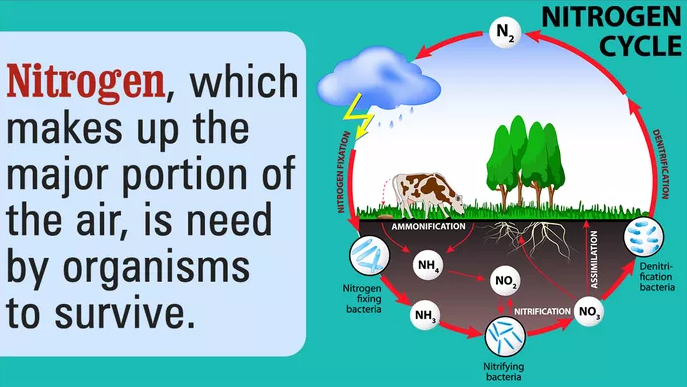 Actual means for concern in 2019 of what’s happening based on recent scientific data. Yellow is before the industrial revolution, blue is where we can safely live, red is what is starting to affect populations.

So what is going on with the Nitrogen cycle? Why is it so off the charts?

Nitrogen is a limiting factor in the growth of plants. A limiting factor is the factor that determines how many plants will grow, due to that “factor” being the least easily available nutrient. Once we figured out that certain plants enriched the soil’s nitrogen content, farmers changed their pattern of farming to inculcate leguminous plants into every second cycle of plants that are grown on a given patch of land.

While these nitrogen-fixing bacteria were fixing about 100-300 Tg (terra gram) of nitrogen per year, with the changes to the farming pattern, this increased by about 15 Tg. With the invention of the Haber-Bosch process, our production of reactive nitrogen shot up to a staggering figure of 170 Tg per year!

There is no denying that increasing the nitrogen content of the soil has helped in feeding plenty of people around the world. However, the increase of reactive nitrogen has also lead to increased pollution, acid rain, lower visibility, etc. Nitrogen oxides can also lead to the formation of ozone in the lower levels of the environment, which worsens chest problems like asthma, etc.

Another major effect of the increase of reactive nitrogen is eutrophication. The increase of nitrogen compounds in the sea and soil has lead to the increased growth of microbes and algae. This leads to algal blooms, which threaten the life of other marine creatures in water bodies.

Takeaway: Without considering the full impact of the entire connected cycles, it’s literally a waste of breathe to debate any singled out cause & effect. It’s convenient, but it isn’t the complete truth by any means. Its all a connected domino effect.

This is exactly the regeneration methodology foundation Quantaloop is built on: Fix biodiversity and the natural cycles and it will naturally fix the problems.