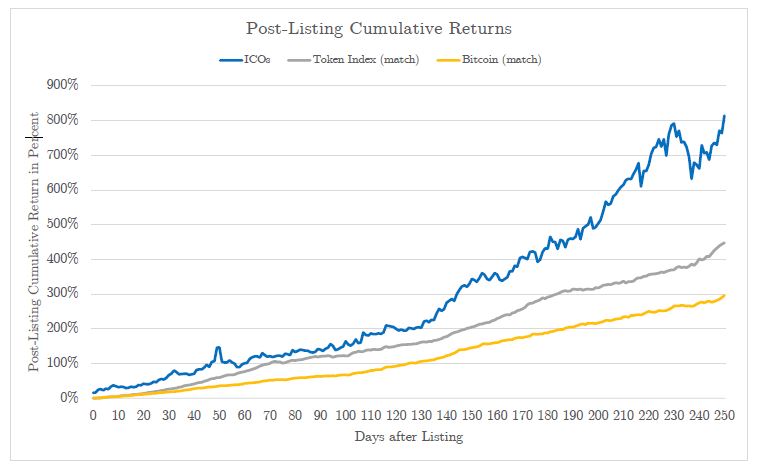 The 54-page report, titled “Digital Tulips? Returns to Investors in Initial Coin Offerings,” examined 4,003 ICOs which raised a combined $12 billion and tracked the value of their tokens across different timeframes. The study found that the average ICO token rose 179% from its token sale price to its opening price after achieving listing on a cryptocurrency exchange, a holding period that lasted an average of just 16 days. Even after assuming that tokens that failed to achieve listing within 60 days represent total losses for buyers, the average investor managed to net an 82 percent profit against USD. Date Written: May 20, 2018

Initial coin offerings (ICOs), sales of cryptocurrency tokens to the general public, have recently been used as a source of crowdfunding for startups in the technology and blockchain industries. We create a dataset on 4,003 executed and planned ICOs, which raised a total of $12 billion in capital, nearly all since January 2017. We find evidence of significant ICO underpricing, with average returns of 179% from the ICO price to the first day’s opening market price, over a holding period that averages just 16 days. Even after imputing returns of -100% to ICOs that don’t list their tokens within 60 days and adjusting for the returns of the asset class, the representative ICO investor earns 82%. After trading begins, tokens continue to appreciate in price, generating average buy-and-hold abnormal returns of 48% in the first 30 trading days. We also study the determinants of ICO underpricing and relate cryptocurrency prices to Twitter followers and activity. While our results could be an indication of bubbles, they are also consistent with high compensation for risk for investing in unproven pre-revenue platforms through unregulated offerings. The traditional sources for seed and early-stage funding have recently been supplemented with crowdfunding: raising money from many small investors, in small amounts, over the Internet. Early on, crowdfunding was provided in exchange for future rewards or deals on products (e.g., Indiegogo, Kickstarter), and more recently for securities (equity crowdfunding). Advances in the blockchain technology have also led to a new hybrid form of crowdfunding: token offerings, also known as initial coin offerings (ICOs), which are the subject of this paper.

Tokens are cryptocurrencies, digital currencies for which all records and transaction data are protected by cryptographic methods. Entrepreneurs issue branded tokens to raise capital to create an online platform or ecosystem, in which all transactions require the use of that native token. In the 16 months since January 2017, over 1,000 startups successfully raised a total of about $12 billion using ICOs. Soon after the ICO, tokens are usually listed on one or more online exchanges, providing liquidity for token-holders and a signal of the quality and future prospects of the platform. The token markets are fairly liquid, with $3 million in average daily volume (for the average token) in the first thirty days of trading. The closest analogue to the ICO is the Initial Public Offering (IPO) of equity. In addition to selling a different asset, two key differences between ICOs and IPOs are: (1) ICO firms are much younger and smaller, typically in the earliest stage of a firm’s life cycle, and (2) ICO firms do not use an underwriter to help determine value and attract buyers. As a result, it is not clear how two well-known characteristics of the IPO market, underpricing (Beatty and Ritter, 1986) and post-IPO underperformance (Ritter, 1991) translate to ICOs and listed tokens.